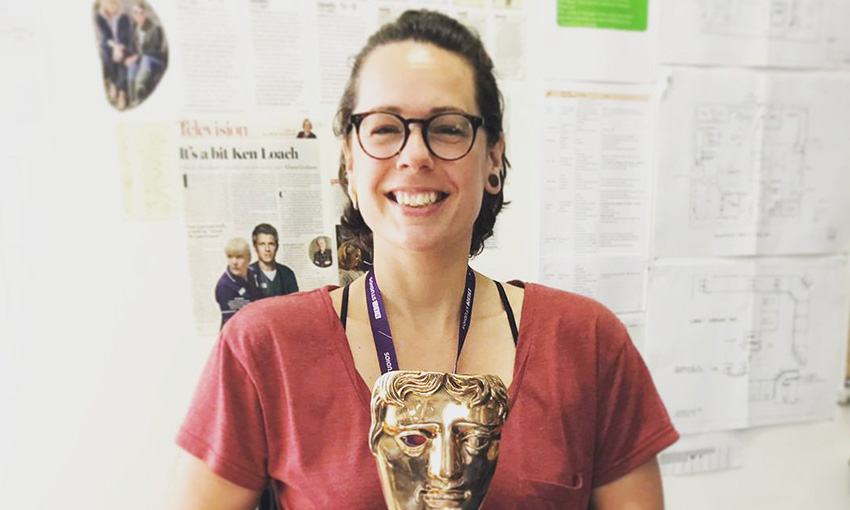 I came to Cardiff Metropolitan University as a mature student in 2011 after coming back from travelling with the looming dread that I had no idea what I wanted to do with my life. I had always been interested in stories and storytelling and so I thought that I might perhaps go to university to study a writing degree. As this was wasn’t a vocational subject but rather a creative one, I was warned off by a few people who told me to do something that would definitely end in a job, such as nursing.

However, I stuck to my guns and signed up for a 3 year joint degree in English and Creative Writing and this turned out to be one of the most important decisions of my life!

I now work for BBC Studios as a Story Editor on the long running continuing drama Casualty after starting as a Researcher in 2017. This means I am part of the small team who write the storylines for the serial characters, invent new characters, devising on screen content, deliver high quality TV and established character development. I also work closely with the story writers for the BBC drama Holby City, to discuss major stories to make sure there’s no overlap in storylines. I absolutely love my work and it is something which I would not have been able to achieve so quickly had it not been for my degree.

Coming back to full time education after having 8 years out was daunting. I hadn’t written an essay for almost a decade and I was a lot older than the majority of my peers. I always had the vague idea that I wanted to go into something to do with writing and the course at Cardiff Met gave me the skills to do just that, a few times in fact. Being able to deconstruct a story, be it a classic literary work or a piece from someone in my class, alongside crafting believable dialogue, narrative construction, how to effectively critique work and how to build a character, is something which I learnt to do during my degree and I rely on heavily every day of my career.

I also used these techniques in my work before my position at the BBC, which was working freelance with Age Cymru on a project called cARTrefu, which involved me holding 8 week residencies in care homes where I hosted weekly creative writing workshops with the residents. Another job which I absolutely loved!

I am still writing and have had two short films produced, one by It’s My Shout in 2016 (‘Leonard’s Neighbours’) which won Best Film, and another by Focus Shift Films (‘The Machine’, 2018) which is currently doing the festival circuit and has been shown at screenings all over the world and won many awards. My third short film is being produced this Summer and I am also working on my first feature film with a director, writing my next short film and a few other projects alongside this.

During my time at Cardiff Met I also co-wrote a play for Mercury Theatre Wales and wrote for Radio Cardiff, as well as having a few poems and short stories published. A lot of these stories were initially inspired by workshops or prompts from my undergraduate course.

I look back fondly at my time at Cardiff Met and am still in contact with some of the lecturers. I can honestly say it was a pivotal moment in my life and helped me massively to get to where I am today – a creative career with amazing, talented people.