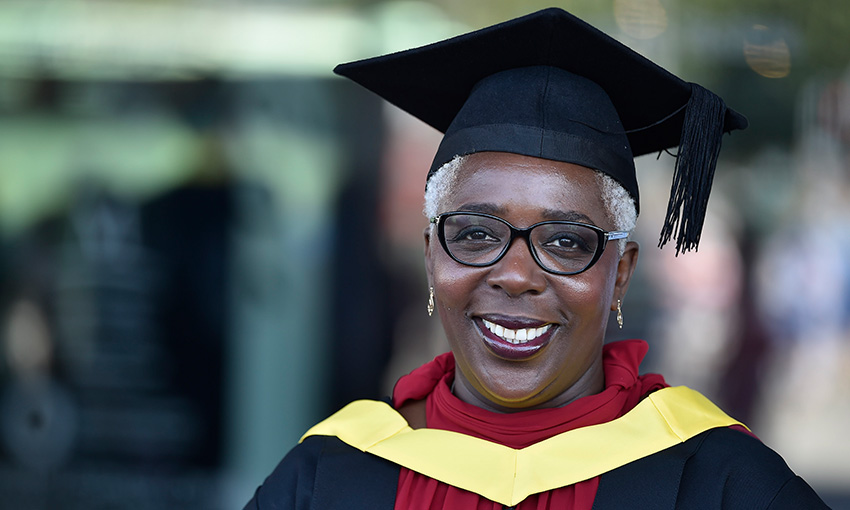 In January 2016 I turned 45 years old, I had recently adopted our gorgeous child and life was good. I did not envisage it would get any better and later that year I would be attending university…. and three years later I would be a qualified social worker!

It was always a distant dream of mine to study Social Work, but one that I did not feel I was good enough to make a reality. However, being a first-time parent changed my goal posts, I wanted more for myself and my family and I was determined to do just that. I decided to study the BSc (Hons) Social Work at Cardiff Met.

Throughout my career I had worked in social care roles. Working alongside Social Workers made me realise that this was what I wanted to do. My volunteering experience of working with young, vulnerable women and paid employment in a supportive role with families stood me in good stead to meet my application requirements to have 420 hours of previous social care experience. Fifteen years earlier I had missed out on an opportunity to study as an apprentice for a social work degree by a single point. Sadly, this fueled my lack of confidence in my abilities and so I just dropped the idea at the time. Now my life was different, and I was determined and not going to give up so easily.

I knew it was going to be a difficult journey with lots of challenges. The first was gaining equivalency qualifications for Maths and English to be able to even apply for the Social Work degree. Thankfully, these qualifications are recognised by Cardiff Met and I attended the university to sit my exams. As a result, I was late applying and had to go through clearing. I really had to battle against giving up.  I attended an Open Day and had the opportunity to meet and talk to tutors, which really helped. Having worked hard and passing my equivalency tests, with an equivalent to a GCSE grade B in Maths, I submitted my University application with a new level of self-confidence. Unfortunately, I wasn’t successful and went onto a reserve list, and then my hopes were realised and I finally got a place. The hurdles I went through really made me so much more determined to succeed.

As a mature student I found being introduced to the academic world of theory, research and legislation fascinating. Putting all this down on paper, however, was a real challenge.  It took a bit of time, but I learned that writing a paper or essay was about populating a sort of ‘template’ structure. My home life was taken over by books and research articles and papers. I no longer accepted things people said in discussion unless I knew what the basis was, or their information source. I think I made them think differently too. I read and read and read. It was like a whole new world to me.

Trying to apply structure to an academic paper was hard for me though. It wasn’t until the end of my first year that I established why. After failing one of my modules a lecturer asked me if I had ever been tested for dyslexia, which I hadn’t because I did not ever think that my difficulty was due to dyslexia. I decided to contact the university support team, and they arranged for me to be screened. I was diagnosed with dyslexia and received disability support package during my 3 years of study, which included financial support to help with photocopying and ink costs, IT equipment, 1:1 study skills tutor (she was amazing). Having this diagnosis was actually a great help because it allowed me access study support skills. It also explained why I found some things difficult, which was not because I wasn’t clever enough.

Throughout my 3 years of study I faced many hurdles and the hardest of these was my mum passing away just as I started my second year. This was a really difficult time, but she knew how important this was to me. She told me, before she passed away, how proud she was of me for doing this. Her encouragement and belief in me, carried me through. Not long after my mum died, my daughter and wife were admitted to hospital. My resilience and resourcefulness were really tested. I had to be super organised and to focus on my well-being. I accessed the university pastoral care, which helped.

I have loved my 3 years of study at Cardiff Met. I learnt so much and took on every learning opportunity presented to me. All that I gained in my classroom and studies came to life on each of my practice placements, which were very different but equally enjoyable.

Looking back, I realise how far I have come, and how much I overcame to do that. I was driven by the thought that you can be whatever you want to be if you are determined, work hard and have the right support network.

I have now successfully graduated with a 2:1 and I was offered a job as a Social Worker in frontline child protection, 4 months before I completed my degree. I am really proud of what I have achieved, but what I have also realised is that this is just the start!