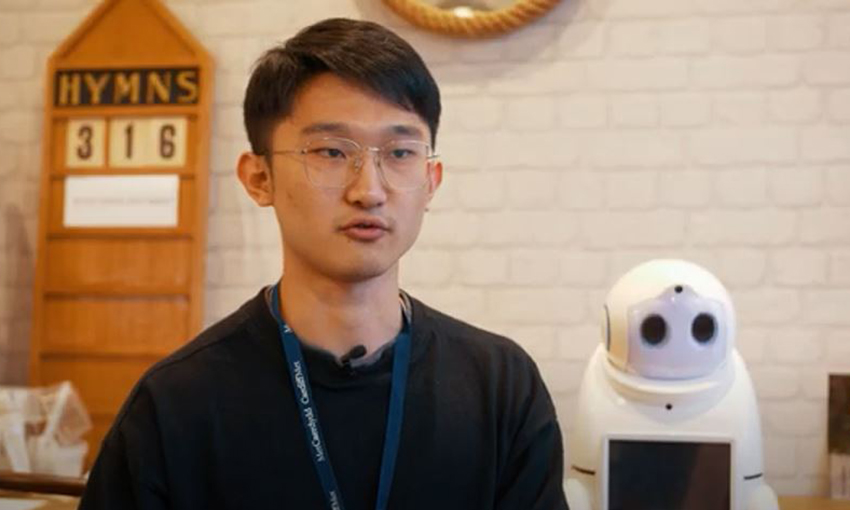 My name is Yang Jiaji. I recently graduated from the MSc Data Science, and I’m now a PhD student at Cardiff Met.

I don’t know if you have ever watched a cartoon called Astro Boy in your childhood. Astro Boy was a powerful robot with human thinking and emotions, living in a futuristic world where robots co-existed with humans. Every time I watched the cartoon as a child, it would give me hope that I could own a service robot all for myself in the future. Many years later, Cardiff Met fulfilled my dream.

During my studies at Cardiff Met, I joined the EUREKA Robotics Lab to work on a project focused on the application of humanoid robots to the service industry. Even now, I can’t forget how I felt when I saw those robots for the first time. In a warm academic environment, I learned how to control various humanoid robots.

With the help of my supervisor, I developed an application that enables one of these robots to serve in a restaurant setting. My supervisor helped me reach out to a local restaurant, 316 Home Café @ Mrs Jones Caters. Both my supervisor and the café owners were willing for me to conduct real-world trials and experiments with the humanoid robot program I developed. I was really excited when my supervisor told me that this would be Cardiff’s first ‘robotic waiter’!

We brought the robot over to the café in two separate occasions, to try the program and test the reactions of real-life customers. I will never forget how the first customers looked at the robot once they saw it when coming in for dinner! I guided customers and explained how to use the program, and they gradually learned how to interact with the robot. Many even asked me to help them take pictures with the robot.

Even though I encountered a lot of difficulties in the development, when I saw my efforts become a reality, the fatigue caused by the difficulties instantly disappeared. Seeing the fruits of my labour realised in real life gave me a great sense of accomplishment. Thanks Cardiff Met for giving me these opportunities! I have now decided to continue my studies here and conduct more research. In such a learning environment, I firmly believe that I can gain even more.