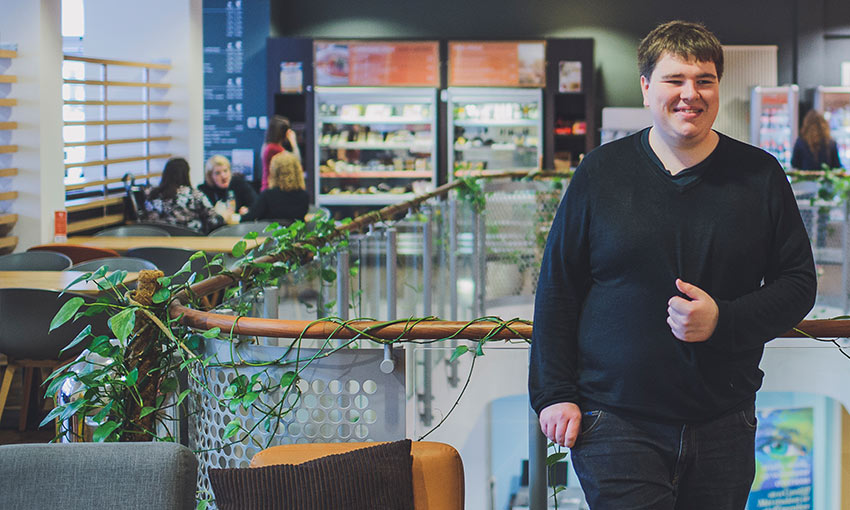 As this is my third year studying Business & Management, I live in private accommodation, in the Cathays area of Cardiff, which in many people’s minds is called “studentville” – owing to the large student population. It is in a great place for Cardiff Met students; you can walk to Llandaff Campus down the Taff trail by the river, and go via Roath Park on your way to Cyncoed Campus.

In the other direction is Cardiff City Centre; all three locations are half an hour’s walk away from my house. If walking isn’t your style (those 9 o’clock lectures can be tough) the bus takes just 5 minutes, and with a handy met rider pass, they make the winter months seem a whole lot easier.

The most important part of the journey is when I arrive. Half of my study time is split between lectures, and the rest then split between workshops and tutorial classes. Lectures are exactly as you would expect – you sit in a lecture room while a lecturer goes through material, and everyone says they are the most difficult part of Uni. Perhaps they are for some, but I think it just takes getting used to – it is a completely different environment to school or college, and you have to accept that.

Most people expect Uni to be full of those massive lecture halls with a few hundred people in them, but in reality they aren’t. This year, I have one full lecture theatre (with a 150 of us), a smaller lecture with 80 people that takes place in one of our Harvard rooms, and an even smaller class with 10 students in a small classroom. Each one has its merits.

When I first came to university, like a lot of people I was expecting 30-hour weeks and very little free time, but I soon realised that wasn’t the case. At the beginning, Campus was huge and overwhelming, so in our free periods my course mates and I decided to head up to the library, log onto the computers and do some work – this quickly became tradition and we’ve been doing it ever since.

By the time the third week of Uni came around, I could barely get out of bed. I realised then that my Mum was right all those years ago, saying I had to go to bed early and that I couldn’t stay up until 1am every night! I’d have probably stayed in bed all day if my 9 o’clock lecture wasn’t my favourite module. I think your favourite lecture will always end up being at 9am – that’s just how it is!

Those late nights did catch up with me in the end, so I’m much better at going to bed earlier these days. I’m also good at getting up early for my favourite 9am lecture so I can grab a fried breakfast in the Uni café first!