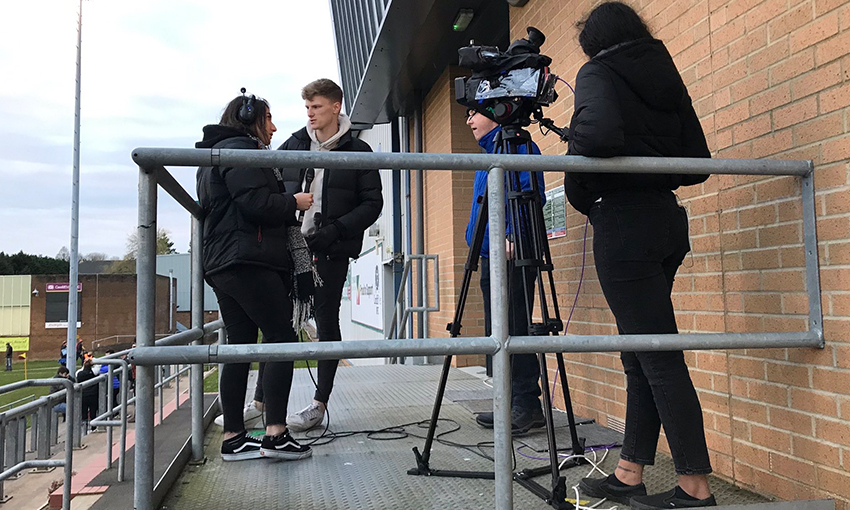 When I started at Cardiff Metropolitan University in September 2016, the master’s course that gave me an experience of a lifetime didn’t exist…

I graduated from the Sport Performance Analysis undergraduate in July of last year with 3 years of unforgettable memories, friendships and experiences. During my time on the course, a new Sport Broadcast master’s degree emerged with Joe Towns at the helm. With plenty of transferable skills, an ambition to further my education and an interest in the field, I signed up, and was accepted into the 2019/20 cohort.

There are never-ending opportunities on Cyncoed campus for athletes, coaches and many other departments of the sporting world. Being a part of the media team for such a successful sporting university was an amazing opportunity to learn and develop across many aspects. One opportunity I definitely did not expect was getting to meet, work with and learn from the Ball State Sports Link students enrolled in the number 1 rated Sports Production University course in the USA, based at Ball State University.

In the early stages of the course, the idea was mentioned of a visit from the students and staff from Ball State with a plan to join us in Cardiff and make a first-of-its-kind, student collaborative effort creating a Transatlantic Documentary based on student athletes at Cardiff Met. Fast forward 6 months, and I had the best 10 days showing them around, making lifelong friends and learning from there amazing skills.

It all started with Joe Towns giving us a list of staff and students who had arranged to visit us in Cardiff. A few of us had a look on social media to see if we could find any of them. Jared Frank was the guy we found first, we sent him a message and within a few days we had a 20-person group chat of British and American students throwing banter around like we had all known each other for years. Fittingly, we named the group chat the Ryder Cup because of the Europe – USA rivalry.

We finally got to see the Ball State group in a class to class Skype Call. The accents were strong, and we were nervous to meet them for the first time. We exchanged video and story ideas as this was the main purpose of their trip (but obviously we explained to them about Live Lounge ‘Power Hour’ and how Wetherspoons is a must-attend). After hours of call time, storylines decided, and social time planned, all we then needed was our distant friends to join us in Cardiff.

I remembered waking up on the morning of their arrival and being very excited. The people who I spoke to regularly for 3 months were finally making their way over to us. I had spoken with my classmate Rhodri and we had decided that we were going to try and help them with their trip as much as possible, so after meeting them on Cyncoed, we joined them for dinner to start to build relationships. We got to know lots of things about them even though they had just had a 24-hour travel day and it was evident they needed their beds. But that’s when the 10 days of fun started.

We tried to make their social side of their trip as memorable as possible, as well as making sure that we could facilitate them to make the best documentary they possibly could. In the space of 6 months, a bond was formed with many of their students and we still stay in contact now, already planning our reverse trip to see them all again, and hopefully, we will stay in contact for a very long time.