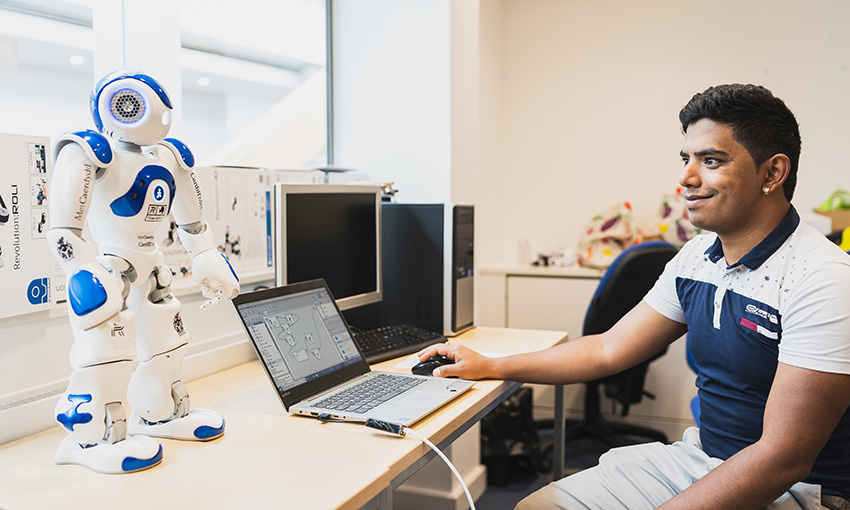 My name is Pawr Dip and I have just completed my second year of Computer Science at Cardiff Metropolitan University. I am working as a Robotics Intern under the supervision of Dr Esyin Chew in the School of Technologies’ EUREKA Robotics Lab. Thanks to this, I recently had the opportunity to represent Cardiff Met and the Lab as a STEAM ambassador under the patronage of the British Council at the National Science and Technology Fair 2019 in Thailand.

STEAM means Science, Technology, Engineering, Art and Maths. The event was all about science and technologies and all local primary and high school students could come and explore these subjects at the various stands. This week-long event was held in mid-August 2019 at the National Science Museum of Thailand, just outside of Bangkok.

I had been to Thailand before, so getting there was really easy and my local travel cost was luckily covered by the British Council. When I arrived at the event on the morning of the first day, I was received by the organiser of the Fair, Mr Ekkarat. The event took place in a big hall and there were many international booths alongside national and local ones. Our UK booth was next to Germany.

I was thrilled to share my knowledge with the students and also hoped to learn something new in the process. I had brought my NAO Humanoid robot to the event. When the kids realised that NAO had started dancing, they all just run to our booth. They were so excited to see it dancing! When we had a good number of students at our booth, the organisers and the team launched a small competition – ‘Drawing NAO robot’. I was ready to show the presentation I had prepared. I was provided with a translator, so that made it easier to deliver my workshop.

On the second day, I had the chance to meet the Thai Minister of Education and other Ministers, as well as Mr Andrew Glass, the Director of the British Council in Thailand. When they came over to our UK booth, I had the opportunity to talk about Cardiff Met and what I was doing with my robot at the event. I loved it when they appreciated my work. They also had a chat with NAO. Being a second year student, I felt overwhelmed and proud of myself.

Overall, the whole week at the event was one of the biggest opportunities of my uni life. I had the chance to work with a wonderful team from Thailand, and after the event, I also took the opportunity to explore Bangkok, the capital city. All this wouldn’t have been possible without Cardiff Met and Dr Esyin Chew!

Check out some video highlights of Pawr’s experience in Thailand: