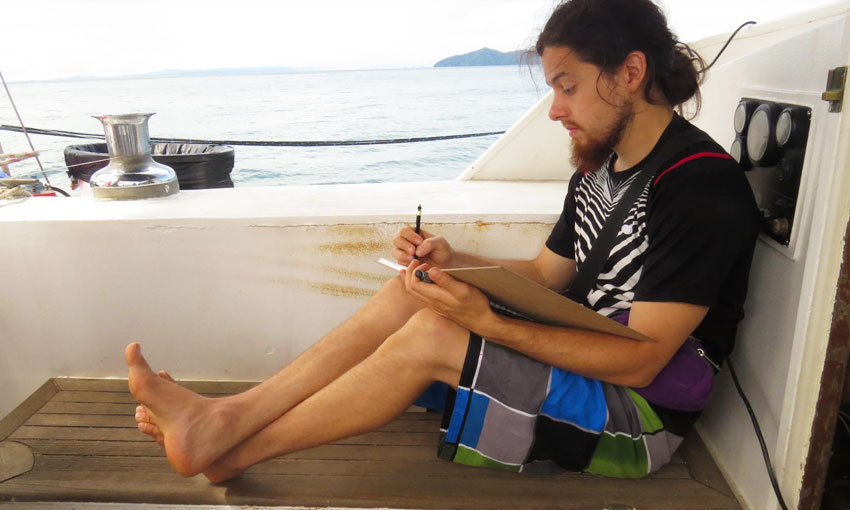 I don’t remember which tutor on my Illustration course at Cardiff Met convinced me to go, but I ended up on a course trip to an event in Falmouth called Witness: Reportage and Documentary Illustration Forum.

I was exposed for the first time, not to the full possibilities of illustration as a subject (for there is no end to them), but perhaps to a doorway, or threshold – like the Wardrobe, the Stargate, and the Puzzle Box all at once. A threshold was pointed out to me, and beyond… possibilities!

I returned to Cardiff interested in reportage and documentary illustration as a career, not yet fully understanding its artistic and commercial possibilities. That question is an ongoing journey, where the question changes with every step.

To figure out what reportage illustration was to me, I decided to start my own project. My father often took a cohort of Princeton University students on a tour of the central provinces of Panama, to look at archaeological sites he worked in during the 70s, 80s and 90s. Some were places where I had dug holes myself as a kid, while there were others barely twenty miles from the farmhouse I spent my summers in that were completely alien to me.

I snuck onto this trip with a sketchbook and an open mind. Draw, draw, ask questions, document, wonder, ponder, confuse them with your ignorance and simply be there when a fisherman explains the great innovation in using garlic to keep the flies off the sundried shark meat they lived off, or a hundred other spontaneous moments.

It was self-made project titled In a Dried Season, and once I returned to Cardiff and packaged it into a finished version, it was shortlisted for the Reportager Award in 2015.

Four years later, with that under my belt, I had become an avid urban sketcher, finding inspiration all over my environment. The mundane and the fantastic, coming together in the lives of everyday people. That is where I found not only my best projects, but some commercial success.

Reportage illustration, a form of visual journalism, could be married to commercial design services as a means to make an income. An ongoing R&D project in which I draw not the everyday or exotic locations, but conferences and lectures, and present them to clients in an appealing way.

On one hand all I want to do is travel the world and draw what I see; on the other, staying local and providing creative solutions to clients gives me an income. But occasionally an opportunity comes along to do both.

The Reportager Award shortlist lent enough weight for me to be considered by Dr. Aaron O’Dea of the Smithsonian Tropical Research Institute to join his team as on-board illustrator for a marine paleobiology field expedition to the Coiba National Park in Panama to document the process of science on a sailboat.

The award convinced the gatekeepers to the piggy bank to foot the bill and send me along. So, I ended up on a sailboat with the main goal of documenting the daily occurrences, struggle, joy and frustration of coring coral reefs in the Pacific.

Coring is the way in which samples of sediments going back thousands and sometimes millions of years are collected. This time around, it was a six-meter-long pipe being hammered into the coral reefs. Each centimetre of sediment provided a wealth of data from thousands of years in the past – everything from the size of the reef at any point in history, to shark and crustacean populations, even to the temperatures of the oceans. In some ways, it is digging for gold.

I drew on a dingy, on a sailboat, underwater, and once on a kayak that kept being swept out to sea on a strong current. I collected my own data and material, preparing for a project that is still in the works – something that I know will be even better than that self-made opportunity with the Reportager Award.

And all because I was willing to listen to my tutors at Cardiff Met and look through that threshold.