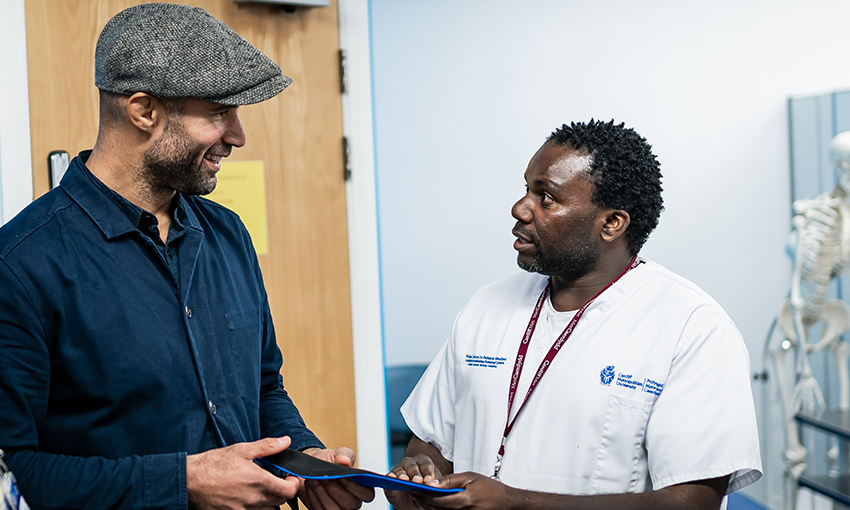 My name is Munetsi Masisimani and I am a third year Podiatry student.

Former Wales international rugby union player turned extreme endurance athlete, Richard Parks, approached Cardiff Metropolitan University’s Podiatry students to come up with an insole to support his skiing expedition in the Antarctic. His mission was to try and break the fastest solo ski world record! His brief to us was to create insoles that had rockers built into them with cushioning to help enhance his performance and to help reduce his pain.

Firstly, we questioned Richard about his past medical history to better understand what kind of insoles were needed for his upcoming expedition. We then ran a series of musculoskeletal assessments, such as neurological and balance tests, along with pain assessments to determine the pain that he was experiencing. The key findings that contributed to the insole design were a neurological condition (Morton’s neuroma), calf muscle tightness (Gastroc-soleus complex), post-surgical knee pain, and previous frostbite of his right big toe.

As a team, we designed and created custom-made insoles, including medium density material, for control and balance within the ski boots. The insole also had a deep heel cup to help with calf tightness, and a metatarsal dome to relieve his neurological pain. Porous materials were avoided as the extreme cold may have led to ice pockets forming within such structures. While muscle stretching exercises are commonly prescribed alongside orthotic therapy, for Richard, the core consideration was maintaining muscle strength required for his upcoming expedition. Despite the original brief specifying rockers, we decided against this due to the increased potential for friction and cold injury. Rather, we incorporated a gradual heel-through-toe rise to optimise his foot function, improve stability and ultimately support Richard to maintain sufficient speed to achieve the world-record.

This real-world experience was a unique and a very special opportunity for us. It has opened our eyes and given us real life experience of working with an extreme endurance athlete and understanding his requirements. This increased our knowledge and confidence in treating such cases. We understand that there is no one solution and that teamwork is important in providing best care for patients.

As a group, we were really pleased to work with Richard Parks, and he was open and willing to listen to our opinions. It’s great to have real-world opportunities like these at Cardiff Met. The message to take away is that circumstances don’t define your destiny, hard work and determination are the key to success.