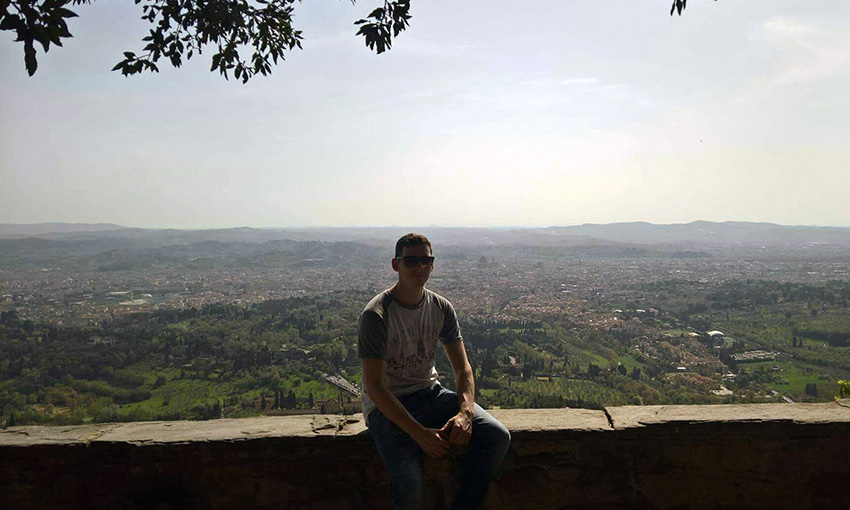 After finishing my A-Levels with an E in IT and a D in music, I had no desire to go into further education and instead decided to work at a retail shop. My academics weren’t all that strong, and I didn’t really think I would do very well at university. I also come from a family where no one has been to university, so I didn’t really see much of an issue with it.

After two years working at the same place, I finally had enough. During a conversation with a manager who could sense I wasn’t happy at the time, he attempted to inspire me by telling me I too “could be a manager just like him after only 17 years”. That was what jolted me to look into going to university, as well as a few conversations with a friend who was studying Software Engineering themselves at Cardiff Met. I’d always been into computers and video games and the work he was doing sounded quite interesting, so I thought why not and gave it a shot, applying through the university Foundation programme due to my dreadful A-level results.

I did struggle initially with the academic work that was required when it came to proper paper presentation, constructing arguments in a cohesive and sensible manner, but I found that the best driving force behind me was that I knew exactly why I was there; to get a degree in something I enjoyed and do it well. This is probably obvious to a lot of people, but it was quite eye-opening in my first two years, where the students that had been in education their whole life fancied uni as more of a party than an education.

During my second year on the Software Engineering course, I became aware of the opportunity to work abroad for a sandwich year. The particular place that interested me was the European University Institute in Florence, Italy. I spoke to a few of the lecturers in the know about this and they were keen to have me apply, so I did. There was an interview with the Head of IT that had flown from the EUI to interview candidates, which seemed to go quite well. After that, I doubted whether I should have gone for the job since by this time I was 25 and thoughts of “you should have graduated years ago” started cropping up. It was a couple of weeks before I heard back from the interview. The university was happy to offer me the position, and I jumped at the chance. All I had to do was finish the second year and get ready to move to Italy on my own in July. It was a bit daunting, but these kinds of chances don’t come around often and I was keen to push myself into uncomfortable situations to see how I would handle it.

During my time at the EUI, I worked as desktop support covering one of their many campus’ buildings and also got involved with the students there, playing football both casually and training with the university team. The work itself was pretty straightforward and it allowed me to really explore both Florence and Italy, going from the local towns, exploring other cities and Elba Island. The staff I worked with were lovely. They took me into their family with open arms and were nothing but welcoming. The language barrier was a little tough at times, but after an intensive two week course and picking up lots of things from playing football, I had enough knowledge of the language to just about get by, although it was never really an issue at the university since their main language for the academics was English.

When I came back for the final year of my degree, I was very focused on finishing as best I could, which usually meant quiet nights in working on my dissertation rather than going out. It also meant I had to seriously start looking into graduate programs or junior opportunities. It was a bit of luck when I was approached on LinkedIn by my now employer asking if I was keen for an interview, as they were looking to bring in graduates. I jumped at the chance. Although I didn’t think the interview went very well, they offered me a second-stage interview which went a lot smoother. A week or so went by, and it was then I received a job offer from the hiring manager. That was the moment when everything I had worked on in the last 4 and a half years had been worth it. At the end of the academic year I managed to pass my degree with a 1st (I was expecting a high 2:1 so was quite surprised), as well as getting the Software Engineering Student of the Year award which was totally unexpected.

A week after the graduation ceremony I started working at LexisNexis Risk Solutions, the company I am still at a year and a half later, where I have gained an incredible amount of knowledge about the industry, best-practices, and I have immensely improved as a Software Engineer. Every day is about solving problems with software and there is always something different to learn. With how fast the industry evolves, I doubt I will ever stop learning new things! There is a good team spirit and we all rely on each other to bring the best out of us. If any of us are having trouble with an issue we all make an effort to pull together and help out, whether that be code reviews, applying a solution that doesn’t seem to work, or just walking through a problem customers are having with the software. As well as this I’ve presented numerous times to the wider business and directly to customers on work that our team has done, both to showcase and to explain solutions to non-technical colleagues. I have a nice work schedule that is pretty flexible, allowing me to turn up between 7 – 10am every morning. Personally I prefer being at my desk at 7am so I can leave at 3:30pm, which is something I don’t think I’ll get tired of for a long while.

It has been an incredible journey to this point, and now I am focused on where my career can take me. I have immense gratitude for the lecturers that helped guide me along my studies, and will always be grateful for the opportunities that Cardiff Metropolitan University allowed me to take.