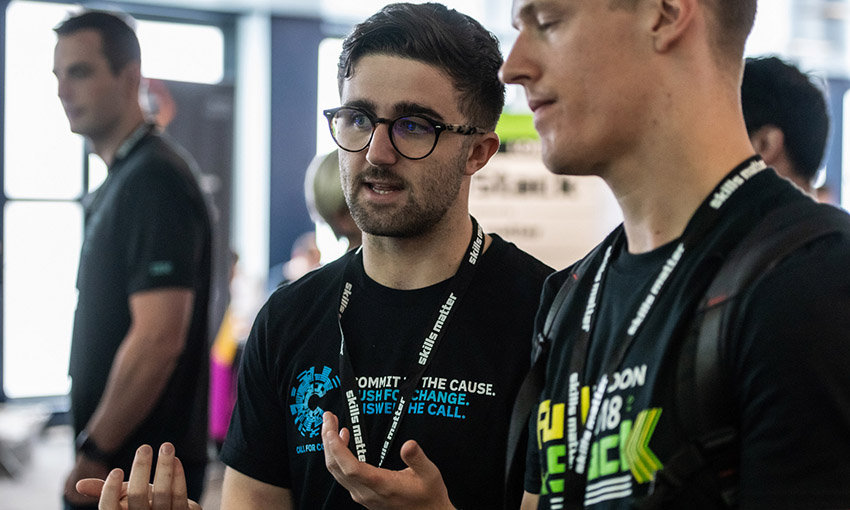 In July 2019, I graduated from Cardiff Metropolitan University with a Bsc (Hons) in Software Engineering. This is probably my biggest achievement in life so far.

The idea of doing work experience to complement my degree had always appealed to me. This was reinforced when I started my course, as from early on you are made aware of the benefits and encouraged to explore opportunities by the course team.

As part of a second year module there was a compulsory two week work placement to be completed, and I thought this would be a good opportunity to apply the skills I had learnt from my course. I volunteered two days a week at Bangor University’s IT department to start building up my CV with relevant experience. Using a combination of the skills I learned throughout my first year, I got stuck in developing a system that the university could use. After this, I felt that a placement year was a natural next step in my university life. I knew how competitive getting placements can get, so I immediately began applying upon starting second year. Using the assistance available in the work experience module on my course, I applied to different companies across the country. By Christmas of that academic year, I had sent around 40 applications with varying levels of success.

After a lengthy interview process including a competency-based application form, an IPAT logic test, an assessment centre and a final interview, I finally got an offer from IBM for their 12-month university placement. I was incredibly happy! My job title was Hybrid Integration Software Engineer. I was in a team working on the IBM Integration Bus, which is now called App Connect Enterprise.

I was based at the Hursley site, which is located in a little village of the same name. It’s a huge site, home to around ~3000 employees (not all of which are based there permanently). The site has everything you could need and more, such as football fields, tennis courts, a cricket pitch, indoor football courts, a gym, a canteen and a pub! There is a range of clubs available including football, cycling, running, reading, gaming and many more. A recent renovation even brought in a games room with pool tables, games consoles, table tennis, and many other arcade games!

After a few weeks of introduction and buddying up with a graduate on my team who was showing me the ropes, it was straight in at the deep end. IBM do not hesitate in giving you responsibility to work on tasks that contribute towards the business. I believe this is important as it allows you to grow and learn quickly.

Our team followed the Agile methodology and we had daily meetings (Scrums) to delegate tasks and report progress. My core role saw me complete a wide range of activities including product development and testing, and I had exposure to a variety of different technologies such as Jenkins, Docker, JavaScript, Java, Python and Git – to name a few! Whilst I was working on testing, I was contributing to the testing framework and migrating tests over to be compatible with the latest product release.

Every summer, the Hybrid Integration also runs a set of workshops where customers spend a week at Hursley trying out the latest product release. The workshops consist of presentations followed by a tutorial demonstrating the new features. This gives the customers a chance to provide feedback on the product and influence what features are required. For this, I developed a tutorial that deployed the product to a Docker container, which is something the customers had been asking for. This was a good opportunity to network as customers had travelled from all over the globe.

Another great opportunity to meet new people and work on incredibly interesting projects is the giveback scheme. This is an IBM initiative in which you are allowed half a day a week to work on projects that interest you around the site. During my time at IBM, I worked on a few different giveback projects, such as developer advocacy, helping open a makerspace, and building a chatbot.

The goal of the makerspace project was to open a space which would allow people around the Hursley site to come down for a lunch break or an evening and work on projects they found interesting. We also worked on projects that we could take to conferences to demo IBM services, such as TJBOT.

For the developer advocacy project, a fellow placement student and I worked closely with marketing to attend developer conferences such as Devoxx and FullStack. The idea was to get IBM developers out of the labs and talking to people outside of the company to promote the IBM Cloud and its capabilities.

I felt IBM was a great company to work for, and my experience there has been fantastic. I enjoyed it so much that I will be returning to IBM in September as a graduate! I would definitely recommend taking the opportunity to undertake a year-long placement during your studies, as it can open many doors for you.