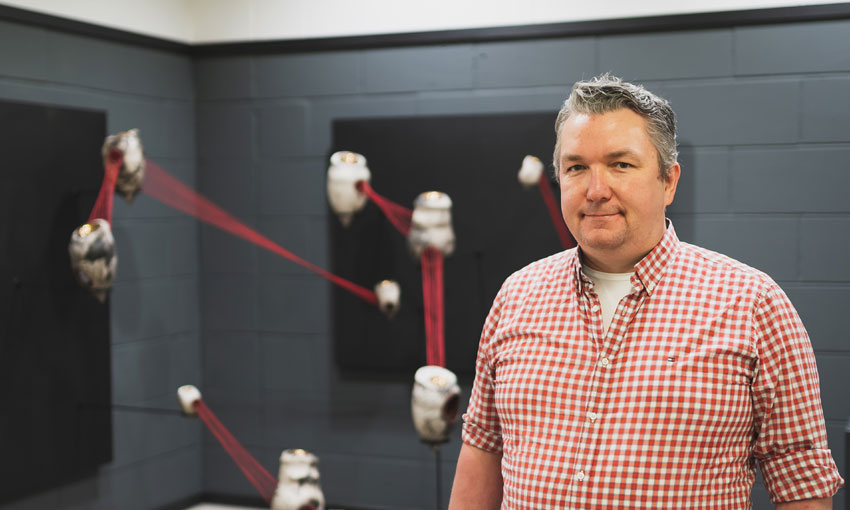 I was Born in Tredegar in 1972 and brought up in the South Wales valleys. It was a period which saw the end of the coal mines and, as a result, all major employment in the area. It was a very difficult start.

An ordinary childhood was not afforded, as growing up on a farm during this period meant very little time for fun and games.

A little older, I found safe haven on a ceramic evening class taught by Billy Adams, although it involved two bus rides and often took two hours each way, but it was here that I found a love of clay and experienced its cathartic values.

I joined the French Foreign Legion at twenty-two and six years later after serving as a parachutist and paramedic I left the Second Foreign Parachute Regiments Camp Raffalli in Calvi, Corsica, a changed man. Several tours of duty had left their indelible mark etched on my soul.

Sixteen years later, a ten-week evening class called On the Potter’s Wheel run by Duncan Ayscough, who is among the tutors on the Cardiff Met BA (Hons) Ceramics course, returned me to clay.

It was even more stimulating this time around and towards the end of the sessions, I was suggested a possible route to further this burgeoning passion.

Despite having no previous qualifications, I was offered a place on the BA (Hons) Ceramics at Cardiff School of Art and Design on the strength of my practice. I accepted wholeheartedly and it was the beginning of what has become a truly life changing experience.

The ongoing suffering of flashbacks and nightmares caused by my military experience and breakdowns in my relationships resulted in a visit to a GP and a referral to a specialist revealing the diagnosis of Post-Traumatic Stress Disorder.

This mental illness was to hamper significant progress over the next few years of study, turning a three-year degree into a broken map of to-ing and fro-ing which has lasted nine years.

But now, in 2019, I will be exhibiting my final degree project at the Cardiff School of Art and Design Summer Show.

My exhibition installation, entitled Connectivity explores the psychological effects of PTSD on social groups. For me it has been a therapeutic journey of de-construction and construction through ceramics and red thread. It portrays the damage caused to relationships and friendships by the problems of mental health, and in particular PTSD.

It has been a tough journey. I am so grateful to both the Academic staff especially Dr Natasha Mayo, Duncan Ayscough, Ingrid Murphy and Claire Curneen for not giving up on me and my passion for clay, and the Technical Demonstrators Matt Thompson, Caroline Taylor and Gemma Wilde for their generous support and patience.

I highly recommend this course and all of the staff to anyone wishing to learn ceramics whether it be for beginners, school leavers or people who wish to further their understanding of process and materials.

It has been a real pleasure to have been a part of this process over these past years. When all is said and done never underestimate the cathartic values of a lump of clay!

See more of John’s work at @johnathan_english on Instagram, or at our #CSAD19 Summer Show from 29 May – 4 June