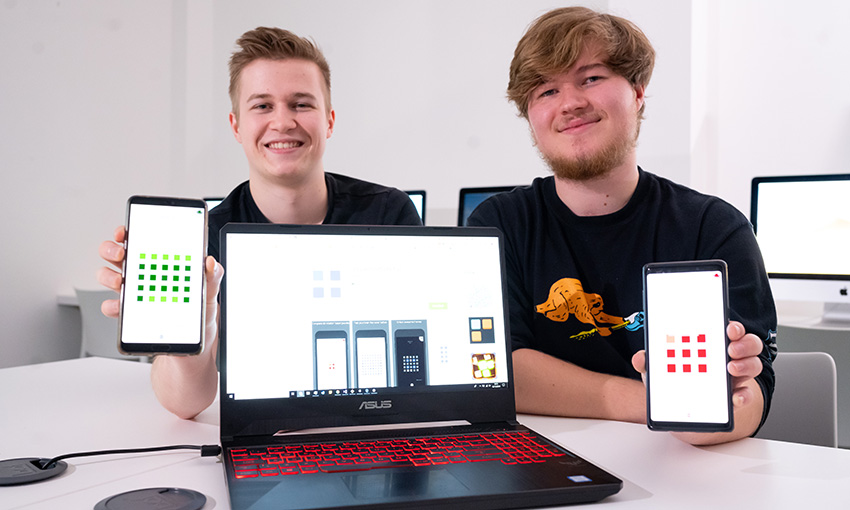 We are Brad and Will, and we are third year students at Cardiff Met, studying Computer Games Design and Development. During our time here, we have learnt loads about developing video games, made a few, published one, and even started our own game studio!

When we started Uni in 2017, neither of us knew anyone. We had both moved to Cardiff without knowing anyone here, but it didn’t take very long for us both to make some friends in the Uni. By our second year, we shared a flat, and we were often talking about game ideas and concepts. Living together also made working together on uni projects much easier.

Starting a game studio was an exciting but scary idea, giving us ultimate freedom over what games we make, but the highest risk. We chose to start small, producing a small game for mobile and seeing where it took us.

Will had the idea for our first game on the walk to Uni one morning in April 2019. The game is called “SquareShift”, and you can now get it on the iOS App Store or the Play Store on Android. The concept is simple, but it’s difficult to master!

After a few months in the works, in September 2019 we launched SquareShift on Android, and in October we got it published on iOS too. We also published our first big update along with the iOS release, which included doubling the number of levels, a basic tutorial, and adding purchasable themes.

During the development of SquareShift, we also took a job to make a game for the department of Biomedical Sciences at Cardiff Met, called “Immunology Mania”. The game is designed to help students revise for their upcoming exams. This game took us a month or so, during which we didn’t work on SquareShift. More recently, we have revisited this game to improve the graphics, with the help of the Cardiff Met Art & Design students.

We have named our studio “Black Pine Games Studios”. The business will either kick off when we graduate, or stay dormant for a few years while we gather more experience. Either way, the studio will aim to make new and exciting games, probably for PC and console.

A huge part of the confidence to start something ambitious like this came from the solid foundations upon many different parts of game development that we were taught in our time on the games development course. There are so many unique skills that go into making a game of any calibre, so the knowledge of the broader aspects of what goes into games that we gained, as well as strong motivation, allowed us to take a step into the unknown that understandably many people might be hesitant to take.