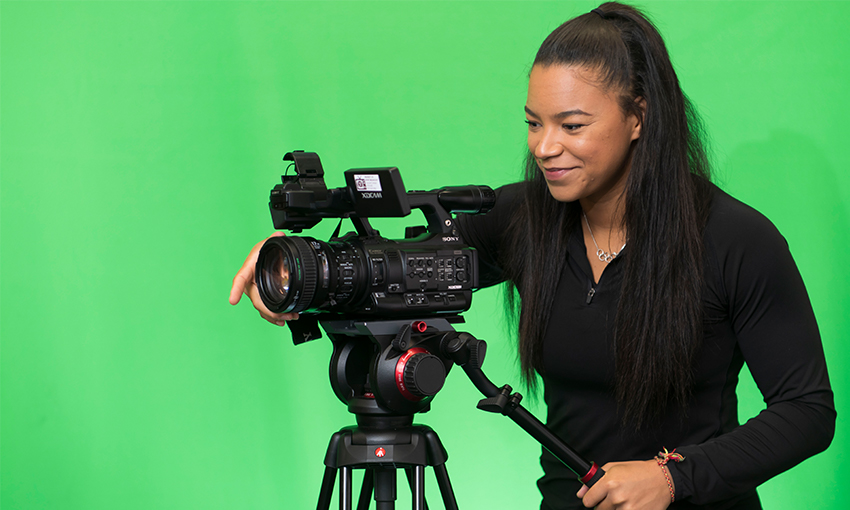 Applying to study Sport Broadcast MSc at Cardiff Met was the best decision I’ve ever made. Although it was scary returning to university having completed my undergraduate degree in 2016, but as soon as I started, I knew I’d made the right decision. I learnt loads of new digital skills and while I found the media law topics challenging at times, the case studies and ethical issues were really interesting!

When I started the programme I originally wanted to learn the relevant skills so that I could become a television presenter. But during the course I had a change I mind. We learnt how to create content for various digital platforms and I realised that was something I really loved doing. I already had a pretty good knowledge of social media after competing at the Winter Olympics and managing my own social media, and I also had a good idea of what content worked best on different platforms. This was an area that I loved exploring further on the Msc programme and applying in a real-world setting. The course also gave me the confidence to explore so many creative ideas in order for us to obtain and hold the users attention whilst using our digital skills to edit footage including the use of music and graphic design. As part of the programme I was also able to make various radio shows which gave me the skills to be able to start a new radio show on local station – Radio Cardiff.  By doing this I was able to get real-world experience of scripting, producing and co-presenting my very own show.

During the Cardiff Met v Bath Uni Varsity I successfully ran the Cardiff Met Sport TV social media accounts, which then gave me the opportunity to work trackside at the UK Indoor Athletics Champs which was amazing! This was my first paid role and I loved being in and amongst the athletes – on the other side of what I’m used to.

For my work placement I was very fortunate to go out to Minsk, in Belarus to run the social media accounts for the European Olympic Committee at the European Games. I worked for a company called MSM management and looked after the Instagram stories which included interviewing competing athletes at the Opening and Closing Ceremony. I had an access all areas pass to go to every event where I filmed and edited daily ‘behind the scenes’ features all from my mobile phone! I was able to create fun and interactive content using the competing athletes- I challenged a shot putter to a pull up competition, I wrestled a wrestler, played beach football and so much more! By doing this I was able to bring the event to life via social media and give people a real life idea of what it was like at the event. It went so well the organisers asked me to join them in Baku, Azerbaijan the following week to do a similar role at the Youth Olympics.

Opportunities really are endless at Cardiff Met. More recently, a company called Livewire Sports got in touch with the lecturers to see if we had any potential athletics presenters that would be able to assist at the next event. I was very lucky for my name to be put forward by my lecturer and I was able to work in Poland at The European Team Championships! I was then asked to return to Minsk to help them cover ‘The Match’ on their social media accounts, ‘The Match’ is a large-scale athletics meet between the USA and Europe. This was a great opportunity and I was able to make relationships and connections with universal broadcasters. Following this, I was then booked to cover the ‘World Urban Games Breaking’ social media by the World Dance sport federation.  Breakdancing has hopes of making the Paris 2024 Olympics so this was an incredible opportunity to generate awareness of this sport.

It’s been such a great summer – full of endless opportunities which I couldn’t even imagine possible before starting the Msc Sport Broadcast course. It’s given me the confidence to start my own podcast for Welsh Athletics which I am able to use the fantastic facilities at Cardiff Met to film and record. The hardest thing for me is fitting in all my training (and I still have my dissertation documentary to finish by Christmas!) But I’ve enjoyed every minute of my journey this year and I know that I’ll always have support from the lecturers at Cardiff Met. Thank you Cardiff Met for the summer of a lifetime!