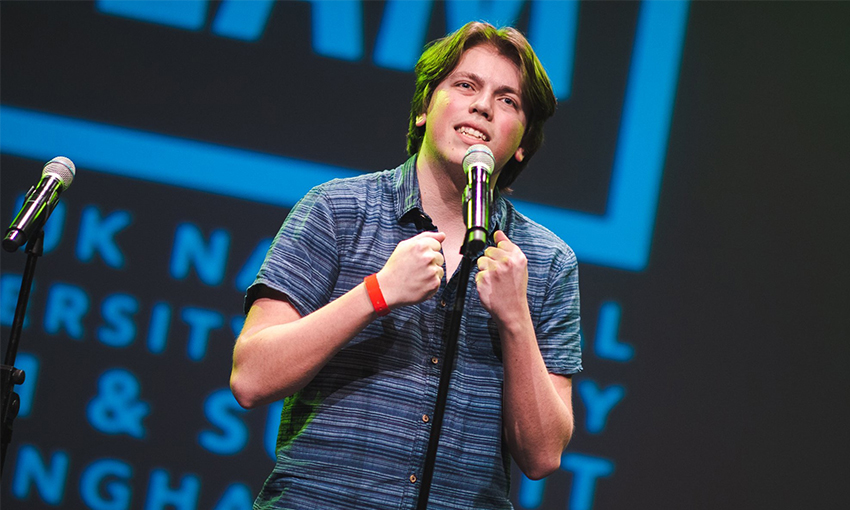 Camp Rock is the reason I wanted to perform – UniSlam feels like a final jam, and I finally got to perform my Demi Lovato. Yes, I’m aware that’s a very strong and particular opening line, but it’s the truth. UniSlam is a place like no other, it felt like a movie, and I’m here to hopefully spread a little bit of the joy that we found participating in UniSlam – the annual poetry slam festival for university teams.

Travelling at 8:30am on a Friday isn’t something I do very often, but getting aboard the train to Birmingham as a team of competitors, supporters and of course our coach, made it feel normal. Alana, Dee, Meriem and I felt nervous, we didn’t truly know what we were getting ourselves into, Cardiff Met, and no Welsh Universities for that matter, have ever competed and so this was going to be a real first for all of us. Our mantra for the weekend was ‘as long as we don’t embarrass ourselves we’ll be just fine’, and it was sincere; we shared a genuine excitement at competing in the UK’s biggest Slam poetry summit and that was before we knew of all that was to come.

We arrived to a panel of guest speakers, accomplished member’s of the poetry world who we and our peers bowed before. Friday saw us able to choose 3 of 8 workshops with these esteemed professionals, and they were all game changing, in every sense of the word. I came out of each workshop feeling more driven than ever before, this place was magic. The night led to a Hit the Ode party, in association with Apples and Snakes, where we saw the first performances of the weekend: wow. Part of me wanted to be bitter, or jealous, but I say this honestly, getting to see so many poets pour their hearts out on that stage was a beautiful thing. There was no place for bad feelings here, every moment we shared was a gift.

With Saturday came competition day. Poetry slams consist of a variety of performers, in this case forming a team, performing in a limited time slot, pouring their hearts out to the audience, word by word, line by line. There were poems about the darkest of times, the best of times, the Blue Power Ranger and even the Fresh Prince of Bel Air; there was truly something for everybody.

The Hippodrome set the scene for a rag tag team of poets with one sole purpose: to not embarrass ourselves. I think it’s fair to say we didn’t. The first team from Wales to compete in this UK wide competition spanning 21 universities with talent you wouldn’t believe. We, a group of first timers taking to a stage we had not seen before was a joyous thing, and we made it to the grand final!

Sierra Demulder, an astonishing poet and one of the headliner judges and workshop leaders, read in the grand final that ‘poets have this remarkable way of making everything beautiful’, and while in her poem this was utterly heart-breaking, for us, for the other 20 teams in the room, and for an audience as encapsulated by it all as the rest of us, we found beauty, sheer and utter beauty everywhere we looked. In the faces of each performer, in each audience member, in the words that held life for every person that read them. We found beauty, and I am thankful that we have had the opportunity to hold it, and share it with such a contagiously infatuated community.

UniSlam say that “the point isn’t the points, the point is the poetry”, and while that rings true, the point, for me at least, was to find a family I never knew I had, that spoke my language and shared my humour, they supported and loved. Another poet said she now had sofas in cities all over the UK where she would be welcomed. I say these connections, intellectual and emotional, are the point, but maybe that in itself is poetry, because what we have all learnt this weekend is that everything can be poetry, and that’s the point.

We would not have had this amazing weekend without the help and support from our lecturer Christina Thatcher – the organiser of our very own Met Slam, the coach of our team, the backer of us as poets, writers and performers – she was the backbone we all needed. Christina’s love of this craft is something all her students admire, and her guidance was unparalleled. This was one of the best experiences I’ve had in university!

I know that many people aren’t fussed on poetry, and maybe that’s because of misconceptions, and maybe it’s not, but that’s okay. We have found unadulterated joy in the words given and received, nurtured and relieved, and I offer that to you all, and say that if you have joy or love or even sadness in your lives, then you have poetry. We found the beauty in everything this weekend, and I think there’s a lesson to be learnt from what a warm community can offer the world, and besides, there’s definitely a poem in that.

With special thanks to Joe and Bethany for being tremendous editors and cheerleaders for the team and Noah, our official photographer who captured the weekend perfectly! Main photo credit: Tyrone Lewis.